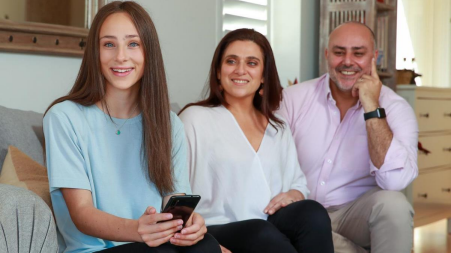 A couple of Aussie parents have come up with an app forcing kids to do maths  and English problems to unlock the other apps on their phones.

Sydney entrepreneurs Issac and Ann Elnekave have turned the idea into an app called 1Question and trialled it on their 13-year-old daughter Alyssa.

“At first I wasn’t sure about it,” Alyssa said.

“I didn’t want my friends to blame me if their parents made them get it.

“But, once I started using it I realised it doesn’t take that long to answer a  question and it’s actually pretty cool.”

Research has shown that almost half of children aged between six and 13 either have a mobile phone or have access to one.

The majority play games on their phones or use apps like YouTube for an average of about five hours a day.

“Engagement is the holy grail of educators — if only kids were as motivated to learn their times tables as they are their TikTok moves.

“We created a solution that blends screen time and study to maximise your child’s valuable engagement.”

Parents can download the $2.99 a month app onto their child’s phone, select their grade and curriculum subjects and then monitor on a dashboard each time their child correctly answers a question in order to open a game or app such as YouTube.

“We designed the user experience to be really simple, but underneath the hood is our incredibly intelligent AI engine,” Mr Elnekave said. “As your child learns, so does the AI, which seamlessly deciphers each child’s areas of strength and weakness and autonomously charts a customised path for their learning.”

The app has a base of 12,000 questions developed by teachers using the Australian, British and American curriculums designed for primary school children.

There are plans to expand the app for high school students including those  taking the HSC.

Since the trial launch, Mr Elnekave said they had been “inundated with  requests for more topics almost daily”.

The entrepreneurs have won support from the Australian Tax Office which  has granted the app Early Stage Innovation Company status because of its  potential for global growth.

The couple is seeking to crowdfund $1.5 million on the OnMarket website and  then will launch it to the world.

The target is to emulate the success of apps like language learning app Duolingo that has been downloaded 300 million times and is valued at $US 2.4 billion.

The couple from Rozelle have also won the support of their neighbours  including actor Gary Sweet, who echoed the thoughts of many parents when he said: “Bloody oath. Where was this app a few years back!”